Even after a record tech M&A run in 2015, dealmakers still had ambitious shopping plans for 2016. Across the globe, tech acquirers announced $500bn worth of transactions in the just-completed year, ranking 2016 as the second-highest annual total for spending since the internet bubble burst in 2000, according to 451 Research’s M&A KnowledgeBase. The unexpectedly strong spending last year came as the number of deals valued at $1bn or more soared to a new record, thanks in no small part to unconventional buyers ready to write big checks.

Although overall M&A spending dropped just 15% year over year in 2016, the year started much slower. In the opening months, the value of announced transactions was running at only half of 2015’s average monthly level. Only a summer surge pulled last year above a middling performance. In the back half of 2016, companies shrugged off the political shakeups in the European Union and the US and inked big deals. Nearly two-thirds (63%) of last year’s total announced M&A spending came in the final six months of the year, according to the M&A KnowledgeBase.

Even with the decline in the aggregate value of tech transactions in 2016, spending has still increased for three of the past four years. That surge, which has seen the annual amount of money spent on acquisitions more than double over the period, has expanded the pool of tech buyers beyond the ‘usual suspects’ of big-name corporate acquirers. For example, private equity firms announced more transactions in 2016 than any year in history, with spending soaring to its highest level since before the recent recession, when ‘club deals’ were all the rage. Also, Asian-based tech companies accounted for 16 of the 98 transactions valued at $1bn or more, an unprecedented share of the top end of the M&A market for the traditionally conservative shoppers.

As to where that leaves tech M&A for 2017, we’ll have some predictions about that from the main participants in the market later this week. In mid-December, 451 Research surveyed – separately – both corporate development executives and senior investment bankers to get a sense of their plans and pipeline for the coming year. One high-level finding: for the first year in the decade of surveying both groups, the forecasts didn’t exactly line up with one another. Uncharacteristically, bankers sounded a bearish tone for 2017, while corporate executives plan to ramp up their shopping. Look for full reports on the outlook and reasoning from both groups later this week. 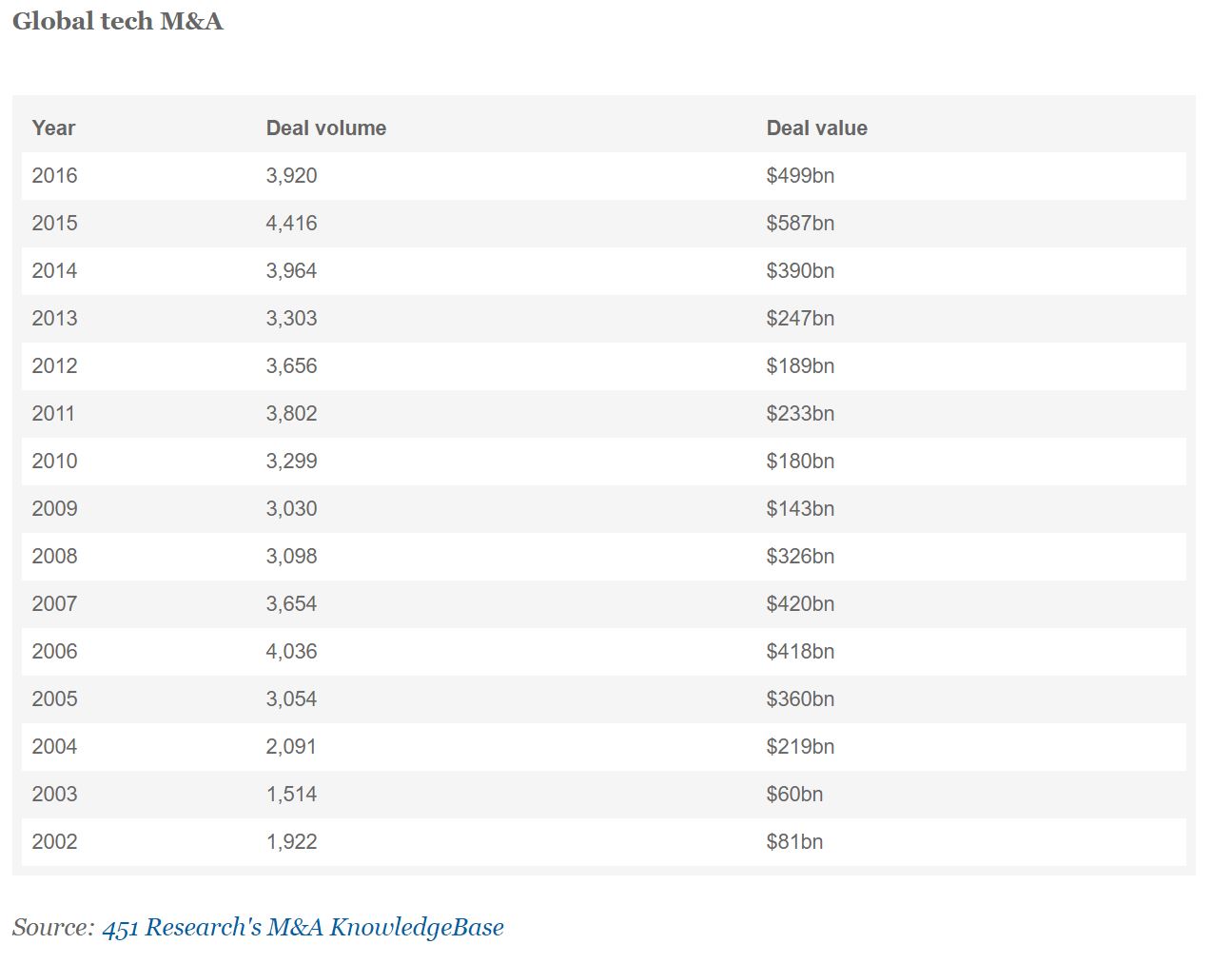