After surging at the start of summer, tech M&A activity in August settled back to a more representative level. Acquirers around the globe announced 281 tech, media and telecom transactions valued at $30.5bn in the just-completed month, according to 451 Research’s M&A KnowledgeBase. The spending basically matches the August levels of the two previous years. However, it is just one-third the amount dealmakers spent in July and half of June’s spending.

The main reason why spending last month didn’t drop further than it did – August still ranked as the third-highest monthly total in 2016 – is primarily due to an unprecedented wave of private equity (PE) activity. Last month, buyout shops accounted for roughly half of all tech M&A spending, which is about three times their typical level. Overall, PE shops were buyers in five of the 10 largest transactions, including both of August’s biggest prints, according to the M&A KnowledgeBase.

While M&A spending held up last month, the same can’t be said for deal volume. The number of prints announced in August sank below 300 for the first time in two and a half years, according to the M&A KnowledgeBase. Deal volume dropped to just 281 transactions, down 18% from the monthly average in 2016. (Relatedly or not, stock trading volume last month also slid to some of the lowest levels in recent memory.)

With eight months of 2016 now complete, tech M&A spending has already cracked $300bn, putting it ahead of five of the seven full-year totals since the recent recession ended. Assuming the rest of the year continues at the same rate it has shown since January, 2016 would see some $450bn worth of deal flow. However, we suspect that the pace of spending in the remaining four months of the year could slow if several looming macro factors (an increasingly rancorous US election cycle, a long-considered interest rate hike, the continued deceleration of most of the world’s large economies) introduce more uncertainty into the picture. 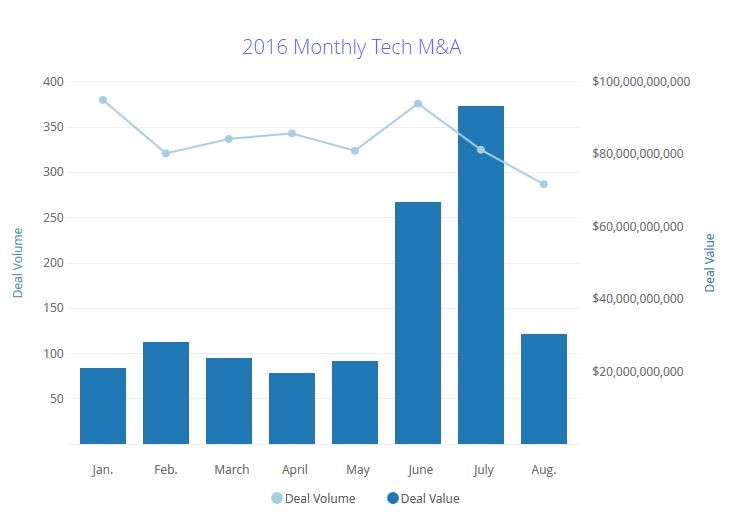