Cash-rich buyout firms are still shopping on Wall Street, undeterred by recent record levels hit in US equity markets. The dramatically increased buying power of private equity (PE) shops has resulted in an unprecedented number of significant tech vendors erased from US exchanges so far this year. Already in just eight months of 2016, PE firms have announced nine take-privates valued at more than $500m, up from an average of about five transactions per year in the past half-decade, according to 451 Research’s M&A KnowledgeBase.

Part of the reason why PE shops are buying big companies is that they have amassed billions of dollars of capital, so they don’t have to sweat when writing the equity check. Further, credit is once again flowing relatively freely to help support these large deals. With money in hand, buyout firms are ready to do business. To get a sense of that, consider Vista Equity Partners’ $1.8bn acquisition of Marketo in May. According to the proxy filed with the SEC in connection with the transaction, Vista announced the purchase just one month after first informally floating the idea of buying the marketing automation specialist.

Of course, it also helps that buyout shops are willing to pay up to do their deals. In the case of Marketo, for instance, Vista is paying 7.9x trailing sales for company, which was growing at about 30%. Vista paid a comparable multiple in its similarly sized reach for Cvent in April. Meanwhile, the buyout pair of Silver Lake Partners and Thoma Bravo paid a full turn more last October for SolarWinds, a roughly $500m business that sold for $4.5bn. The valuation of the network management software provider looks equally as rich when we consider that it sold for 28x EBITDA, by our calculation. 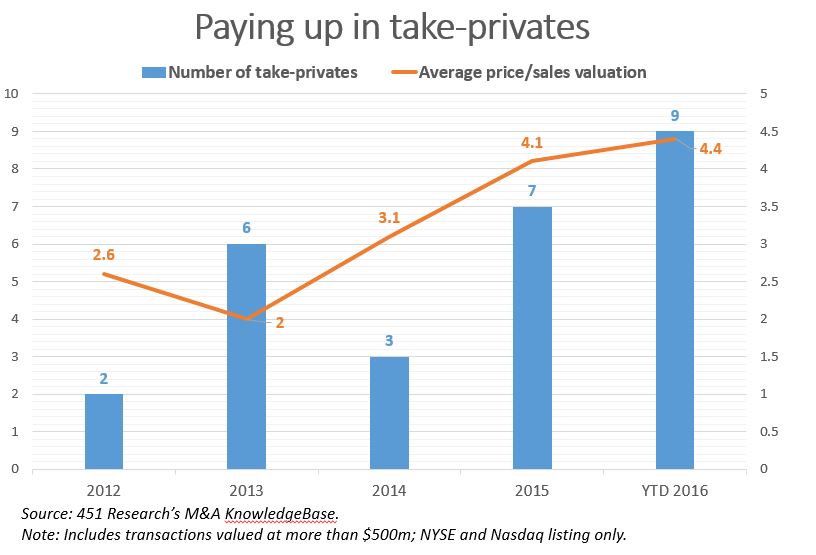