Hosted services M&A in 2017 had a second consecutive year of $15bn+ in spending, an unprecedented streak in the sector. While overall tech M&A spending dropped steeply, it was essentially flat in hosted services. Meanwhile, the median deal value rose as smaller and medium-sized players decided on sale or scale to survive, and as targets grew scarce, acquirers paid higher multiples.

An indicative transaction of these sector trends was also the largest of 2017 – Digital Realty Trust’s $6bn purchase of DuPont Fabros. The past three years have been rich with big-ticket deals in hosted services, but this acquisition stands out because of its outsized multiples – 14x trailing revenue and 23x EBITDA. Those are the highest-ever multiples in $1bn-plus hosted services transactions in 451 Research’s M&A KnowledgeBase, which dates back to 2002.

Digital Realty’s reach for DuPont Fabros was not an isolated incident, either. Three of the four highest value-to-revenue multiples in $100m+ hosted services deals happened in 2017, according to the M&A KnowledgeBase. Overall, the sector’s median EBITDA multiple of 16.1x was the highest since 2012. Three consecutive years of more than $10bn in deal value has consolidated more than 10 million square feet of operational space, according to 451 Research’s Datacenter KnowledgeBase. That has removed many big players from the market, making larger targets scarcer, and thus more valuable in 2017.

In 2018, we expect hosted services M&A to continue to be robust to account for enterprises increasingly pushing workloads to the cloud. According to a 451 Voice of the Enterprise survey last year, the percentage of IT workload spending in the cloud is expected to jump from 27% in 2016 to 46% in 2018. Managed hosting and colocation providers must scale vertically – offering more services – and geographically to suit enterprise needs for functionality and availability, respectively. Large public hosted service providers that are still on the market could fetch a premium, while thousands of smaller players could sell or merge with one another to become competitive. 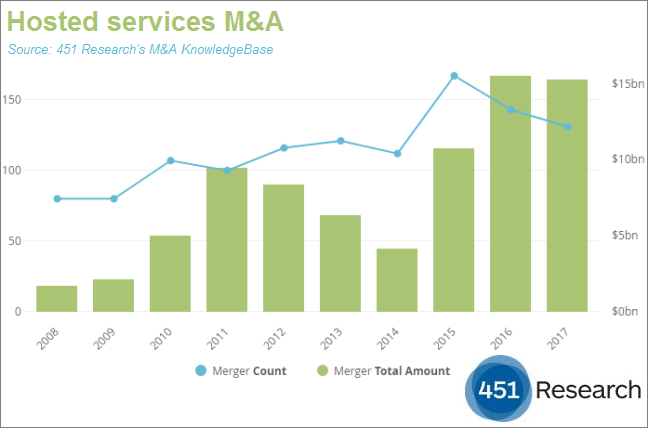