CallidusCloud shells out $26m for Learning Seat, the most it’s ever paid in a single deal. That it’s hitting a new record on such a modest purchase shows that CallidusCloud, which embarked on a steady diet of snack-sized M&A at the start of the decade, has stayed disciplined in its acquisition strategy. Today’s transaction also illuminates a modest increase in appetite – both in deal value and volume – as the sales software vendor has reaped results from previous buys.

The company has now printed four deals this year, its busiest since 2011, when it inked five. But that year CallidusCloud was just setting out on its current M&A strategy of making tuck-ins and low-priced extensions to its core sales performance management software offerings. According to 451 Research’s M&A KnowledgeBase, the company bought only three businesses before 2011. Now, its strategy has proven results and its purchases are more ambitious, if still small. In 2011, only two of its transactions crested $5m – this year, all of them did.

Today’s acquisition adds content for CallidusCloud’s sales training products, a unit established by the $3m pickup of Litmos in 2011. Last quarter, Litmos (and associated training offerings) was its second-largest contributor to revenue. As that division’s contribution has grown, so has its position in the company’s M&A efforts – four of its last seven deals (including today’s) bolstered its training business.

CallidusCloud began its M&A adventure in 2010 amid crumbling revenue. Last year, it put up 16% growth, its SaaS sales jumped 25% and its stock rose about 7x. Of course, that’s not all due to the addition of learning management content and software. The company has enhanced its ability to sell multiple products across sales performance, enablement and execution. Last quarter, nearly half of its bookings came via multiproduct deals, compared with just 20% four years ago.

That’s a heartening development for many of the sales-enablement startups struggling to find an exit. CallidusCloud is among the most frequent acquirers of such companies and the exit environment for those firms, as we detailed in a previous report, reflects CallidusCloud’s own proclivities. With few exceptions, exits for sales-enablement startups have been sparse and small. 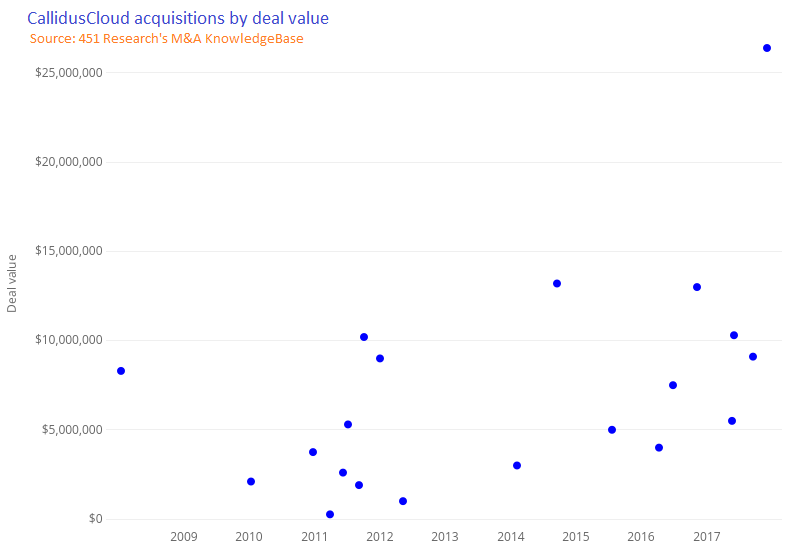