Dealmaking in 2017 is going out with a whimper. Acquirers in November spent just $15.7bn on tech transactions across the globe, the lowest monthly total in three years, according to 451 Research’s M&A KnowledgeBase. The sluggish November activity comes after a similarly anemic October, with both months coming in only about half of the average monthly spending for the first nine months of 2017. Also, the number of deals announced in the just-completed month slumped to its lowest level of the year.

Even as November featured a decidedly lackluster level of overall M&A activity, a few transactions stood out, including:
-After entirely sitting out the wave of semiconductor consolidation in recent years, Marvell Technology Group shelled out $6bn in cash and stock for Cavium. The deal stands as the largest tech transaction in November, topping the collective spending on the next four biggest acquisitions last month.
-The information security industry saw its largest take-private, as buyout firm Thoma Bravo paid $1.6bn for Barracuda Networks in a late-November deal. A single-digit grower that throws off $10-20m in free cash flow each quarter, Barracuda has long been considered a candidate to go private as it works through a transition from on-premises products to cloud-based offerings.
-Richly valued startup Dropbox stepped back into the M&A market in November for the first time since July 2015, purchasing online publisher Verst. From 2012-15, the unicorn (or more accurately ‘decacorn’) had inked 23 acquisitions, according to the M&A KnowledgeBase.

The recent tail-off in acquisition spending has left the value of announced tech transactions so far this year at just $302bn, according to the M&A KnowledgeBase. With one month of 2017 remaining, this year is all but certain to come in with the lowest annual M&A spending since 2013. This year is tracking to a 34% decline in deal value compared with 2016 and an even-sharper 45% drop from 2015. 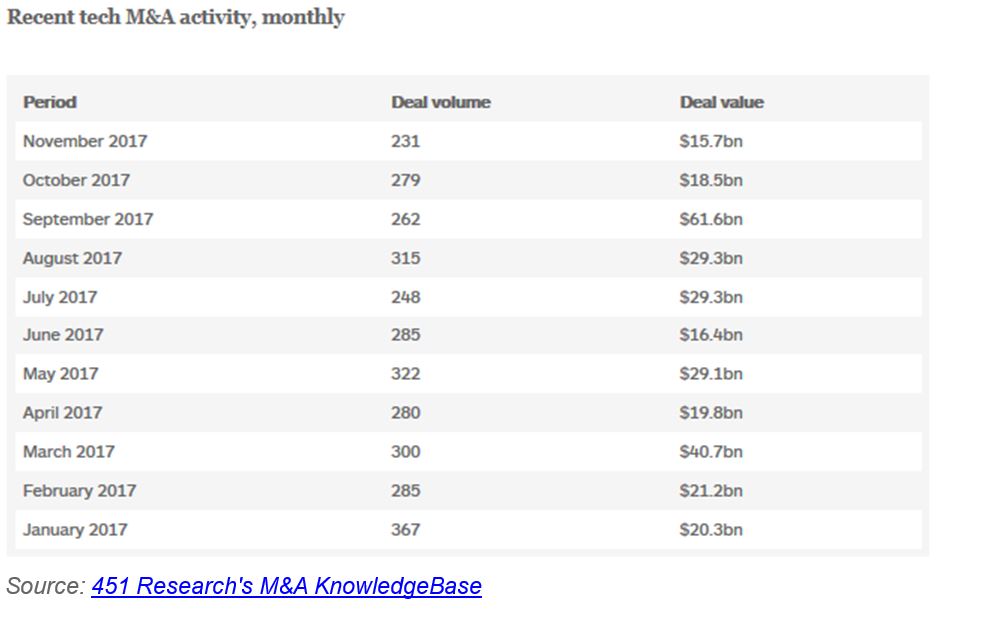