After a record-breaking performance for the software M&A market in 2016, the original cast bowed out as the understudies took the stage. Last year witnessed both strategic and financial acquirers making grand debuts in the application software market, while the most frequent and fulsome buyers of years past largely sat on the sidelines, resting from an unusually active 2016.

Spending on application software targets fell by one-third last year to $41.1bn from 2016’s highest-ever total amid a distinct lack of big-ticket deals. In total, there were 988 acquisitions of software companies, just 30 fewer than the year before. Only eight software targets attracted prices north of $1bn, compared with 14 in 2016, with last year’s tally representing the lowest total since 2009, according to 451 Research’s M&A KnowledgeBase.

As much as the numbers, the buyers were changed from earlier years. Although Oracle finished the year with the $1.2bn acquisition of construction software vendor Aconex, its $1.8bn in software M&A spending in 2017 represented a significant decline from the $10.8bn it spent a year earlier. Others were even less active. Salesforce didn’t print a single software deal last year, after spending $4bn in 2016. At the same time, IBM only did a pair of modest tuck-ins, nothing approaching the scale of its $2.6bn purchase of Truven Health Analytics in 2016.

Half of the companies that paid more than $1bn for an application software target in 2017 hadn’t inked a single software deal in any previous year this decade. Express Scripts came back to the market with a pair of transactions, including the year’s second-largest application software acquisition (eviCore Healthcare for $3.6bn), marking its first tech deals since 2009. Some new PE buyers also entered the software M&A market, including Partners Group, which made its first software transaction by paying $1.4bn for Civica – four times more than it had spent on any tech deal. 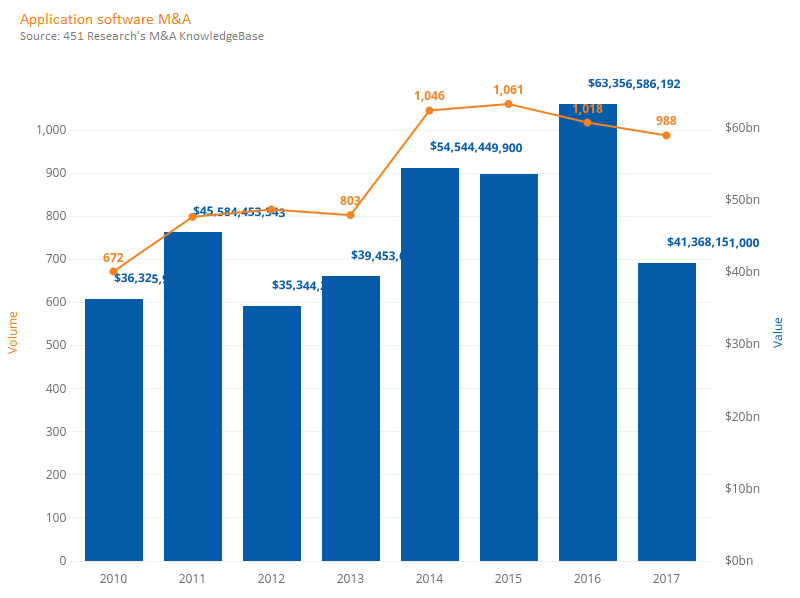