A decade ago, the financial world started its most recent journey toward ruin. Although the total collapse wouldn’t come for another year, the first tremors of the global financial crisis were felt in August 2007. At the time, few observers could have imagined that a bunch of bad bets made on shady mortgages could reduce some of the world’s biggest banks to heaps of rubble.

For some financial institutions, the destruction was self-inflicted. But others were simply collateral damage, counterparties to risky trades that they may not have fully understood but took on nonetheless. Whatever the cause, the result, which was just starting to be realized 10 years ago, was that everyone was in over their head.

As banks went into survival mode, the financial system dried up. Lenders, already worried about the bad debt on their books, stopped extending loans. It became a credit crisis, with whole chunks of the economy grinding to a halt. There was also a dramatic – if underappreciated – impact on the tech M&A market: the crisis effectively ended the first buyout boom.

Private equity (PE) firms were just hitting their stride when the crisis took away the currency that made their deals work: debt. Don’t forget that just months before August 2007, PE shops had announced mega-deals for First Data ($29bn) and Alltel ($27.5bn). Both of those acquisitions were $10bn bigger than any tech transaction ever announced by a financial acquirer up to that point.

Those deals turned out to be the high-water marks for PE at the time, with the water receding unexpectedly quickly. Of the 10 largest PE transactions listed in 451 Research’s M&A KnowledgeBase for 2007, only one of them came after August. More broadly, the last four crisis-shadowed months of 2007 accounted for just $7bn of the then-record $106bn in PE spending that year.

The late-2007 collapse in sponsor spending continued through 2008-09, as the recession broadened and deepened. The value of PE deals in both of those years dropped more than 80% compared with 2007, according to the M&A KnowledgeBase. The PE industry’s recovery from the credit crisis would take a long time, much longer than the relatively quick bounce-back in the equity markets, for instance. Overall spending by buyout firms wouldn’t hit 2007 levels again until 2015.

For more on the impact of PE activity in the tech market, be sure to join 451 Research for a special webinar on Thursday, September 7 at 1:00pm ET. Registration is free and available by clicking here. 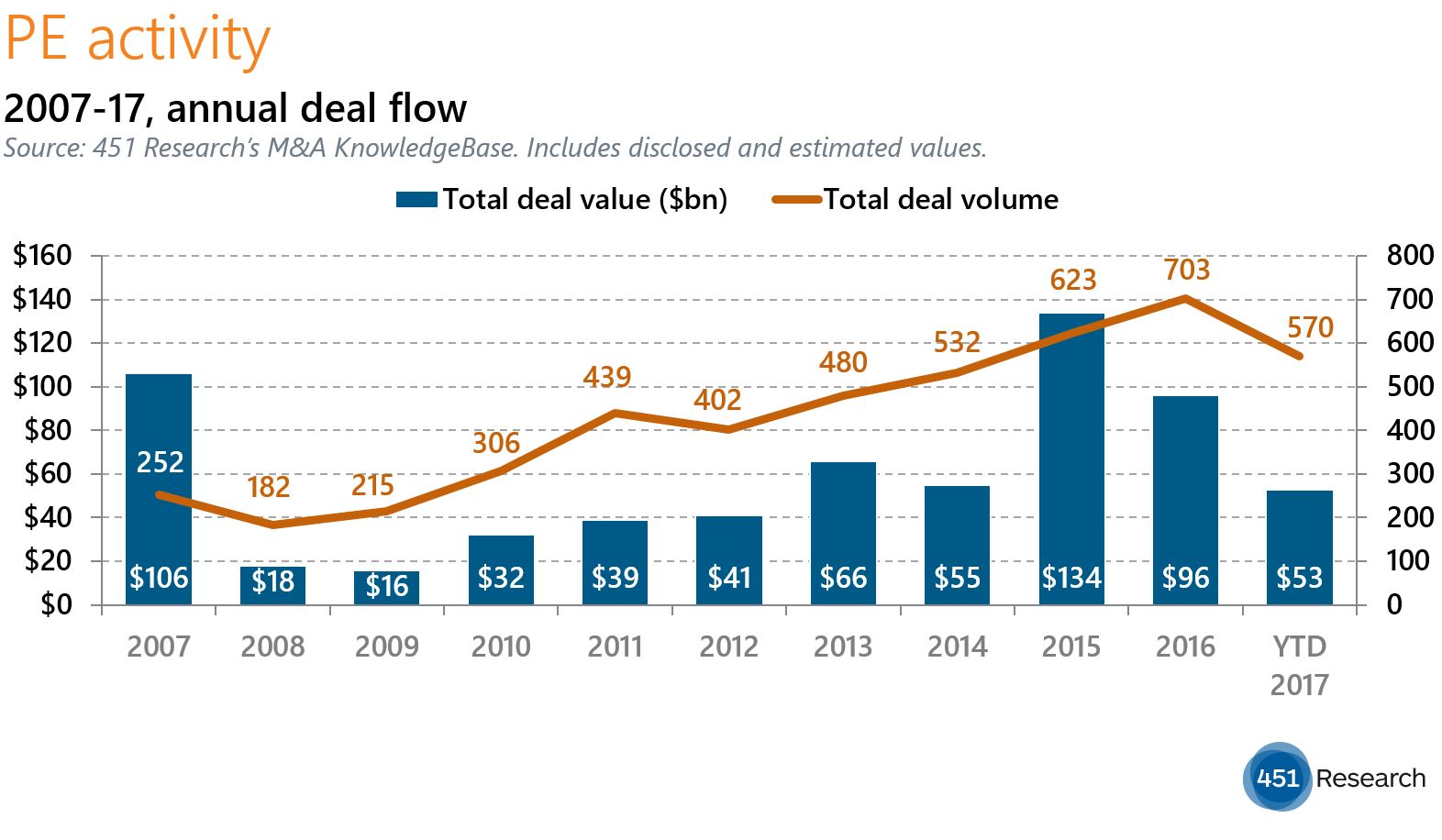