A little more than a year after a Chinese consortium acquired slumping printer maker Lexmark, the group has sold off the company’s software business to Thoma Bravo. The enterprise software unit had basically been for sale since the Chinese buyout group, which is led by a hardware-focused firm, closed its $2.5bn take-private of Lexmark. Although terms of the sale of the software division weren’t formally released, media reports put the price at $1.5bn.

Assuming that price is more or less accurate (we haven’t been able to independently verify it), the deal would stand as the largest inbound acquisition of a Chinese technology asset, according to 451 Research’s M&A KnowledgeBase. Obviously, there have been larger transactions involving Chinese targets. But all 16 of those deals listed in our M&A KnowledgeBase have seen fellow Chinese companies as the buyer. Overall, our data indicates that slightly more than half of all China-based tech vendors sell to Chinese acquirers, although the top end of the market is unanimously weighted toward domestic transactions.

Clearly, although owned by a Chinese group, the Lexmark software division is hardly a ‘Chinese company,’ in the sense of a domestically headquartered operation that does the majority of business in its home market. Lexmark had cobbled together its software unit from roughly a dozen acquisitions of enterprise software providers based in North America and Europe. (451 Research will have a full report later today on how the acquired software business will fit into Thoma Bravo’s portfolio and what impact the deal will have on the broader business process and content management markets.)

Nonetheless, this landmark transaction comes at a difficult time in US-Sino relationships. President Donald Trump has blasted the currency and trade policies of China, although he did tone down his criticism during last month’s meeting with his counterpart, Xi Jinping. Despite the apparent thaw, the relationship between the world’s two largest economies remains chilly. That’s having an impact on M&A, which is a form of ‘international trade’ of its own. In a survey last month of 150 tech M&A professionals, more than half of the respondents (55%) predicted that US acquisitions of Chinese companies would decline because of President Trump’s trade policies. Just 7% forecast an uptick, according to the M&A Leaders’ Survey from 451 Research and Morrison & Foerster.

For a more in-depth look at the trends and concerns around doing deals in China, be sure to join our webinar, ‘The State of Tech M&A in China,’ on May 17 at 1:00pm EST. The webinar is open to everyone, and you can register here. 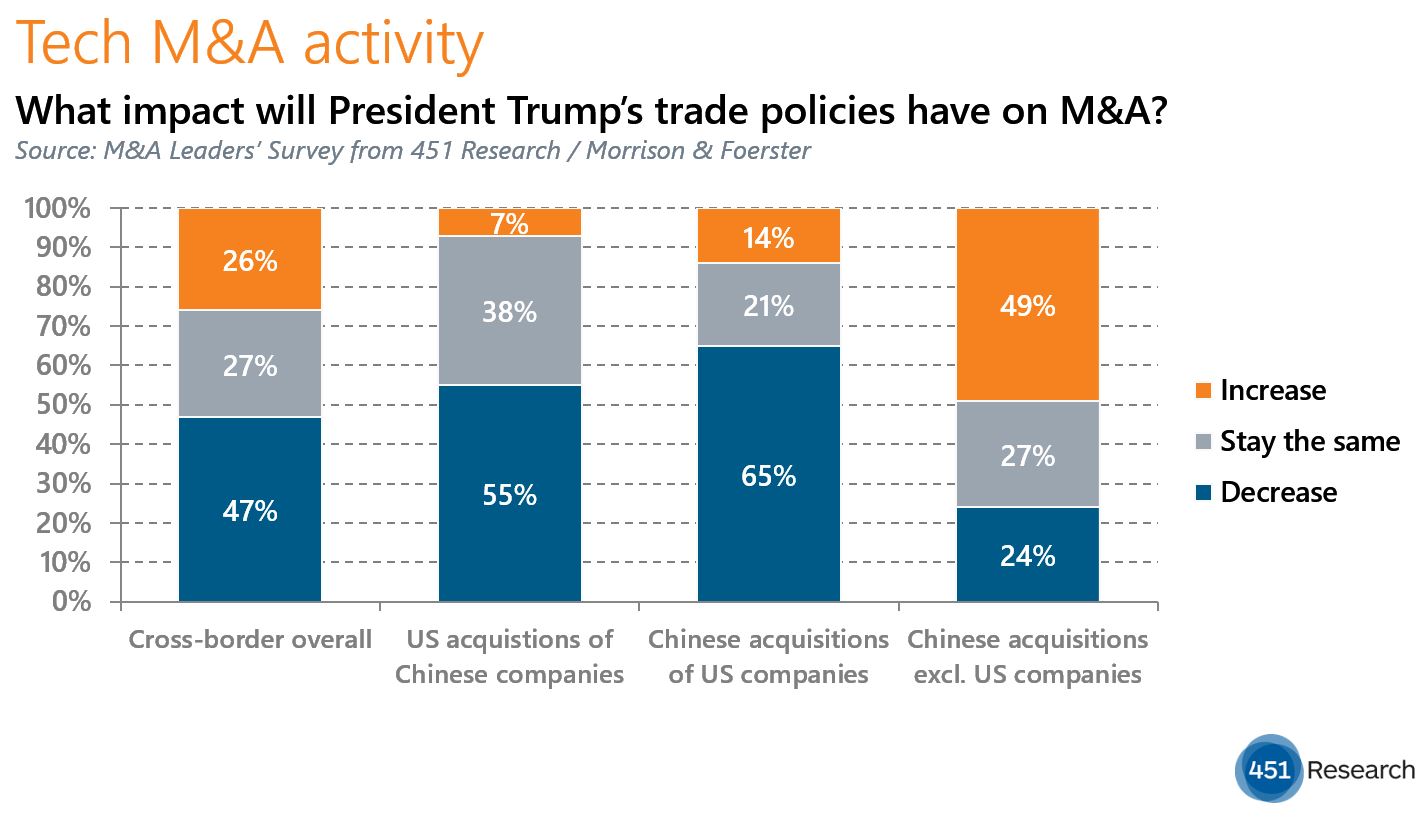