In many ways, the tech buyout barons have themselves to thank for the record run of private equity (PE) activity so far in 2017. The number of so-called ‘secondary transactions,’ in which financial acquirers sell their portfolio companies to fellow financial buyers, has increased for three consecutive years, according to 451 Research’s M&A KnowledgeBase. The pace of PE-to-PE deals has accelerated even more this year, with an unprecedented 64 secondary transactions already in 2017 — more than twice the average number in the comparable period over the past half-decade.

The fact that secondaries have become primary for PE shops represents a fairly noteworthy change in both the buyout shops and their backers, the big-money limited partners (LPs) of the funds. In years past, LPs have frowned on the practice because, in some cases, they might be investors in both the PE funds that are doing the buying as well as the ones doing the selling, which doesn’t really reduce their risk in that particular holding — nor do they truly exit that investment. The practice has been criticized by some for being little more than buyout shops trading paper among themselves.

For that reason and others, our M&A KnowledgeBase indicates that the number of PE-to-PE deals in the first half of the years from 2002-10, when the tech PE industry was relatively immature, averaged only in the mid-single digits. In others words, PE shops are currently doing 10 times more secondary transactions than they did in the first decade of the millennium. Recent tech deals that have seen financial buyers on both sides include Insight Venture Partners’ sale of SmartBear Software to Francisco Partners after a decade of ownership, TA Associates’ sale of Idera to HGGC, and Summit Partners’ sale of most of Continuum Managed Services to Thoma Bravo.

These types of transactions appear likely to remain the exit of choice for PE shops, as both the number of funds and the dollars available to them continue to surge to new highs. The increasing buying power of buyout firms stands in contrast to the diminished exits provided elsewhere for portfolio holdings. The tech IPO market has never provided much liquidity to PE shops. (For instance, neither Thoma Bravo nor Vista Equity Partners has seen any of their tech holdings make it public.) Meanwhile, corporate acquirers — the chief rival to financial buyers — have dialed back their overall M&A programs, and in some cases have found themselves outbid or outsprinted in PE-owned deals by ultra-aggressive buyout shops. 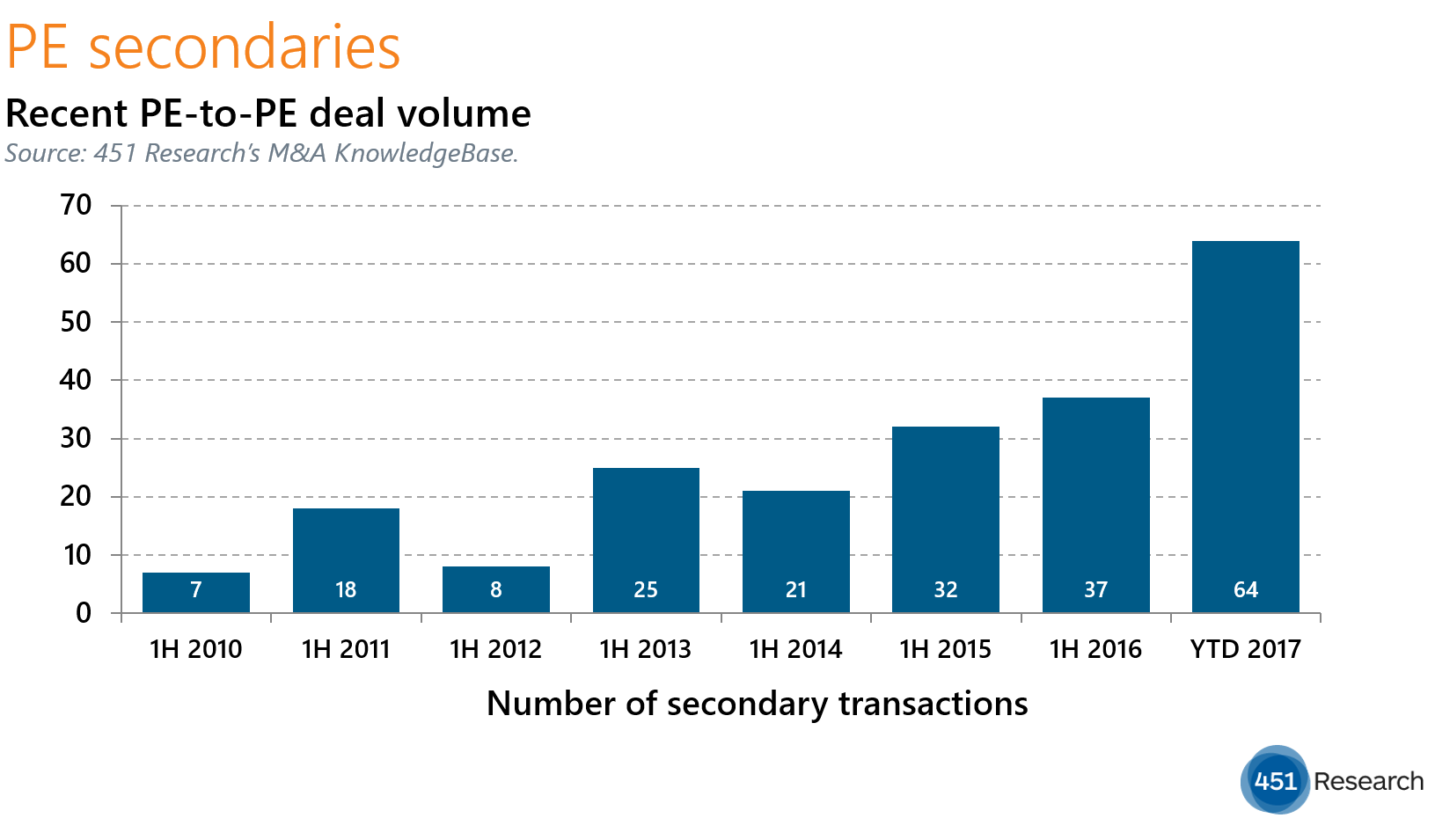