Startups are increasingly stuck. The well-worn path to riches – selling to an established tech giant – isn’t providing nearly as many exits as it once did. In fact, based on 451 Research calculations, 2017 will see roughly 100 fewer exits for VC-backed companies than any year over the past half-decade. This current crimp in startup deal flow, which is costing billions of dollars in VC distributions, could have implications well beyond Silicon Valley.

First, the numbers. So far this year, 451 Research’s M&A KnowledgeBase reports just 439 VC-backed companies have been acquired, putting full-year 2017 on pace for roughly 570 exits. That’s 16% fewer deals than the average number of VC exits realized from 2012-16, and the lowest number of prints since the recession year of 2009, when startups were mostly focused on survival rather than a sale.

The reason for the current slowdown in the prototypical startup-sells-to-brand-name-buyer transaction that has generated hundreds of billions of dollars in investment returns over the years is that the buyers aren’t buying. (We would note that’s only the case for the bellwether tech vendors, the so-called strategic acquirers. Rival financial buyers – both through direct investment and acquisitions made by their portfolio companies – have never purchased more VC-backed firms in history than they have in 2017, even as the overall number of venture exits declines. Private equity now accounts for 17% of all VC-backed exits, twice the percentage the buying group held at the start of the decade, according to the M&A KnowledgeBase.)

Parked in VC portfolios, startups can, of course, build their businesses, along with the accompanying value. What they can’t do as long as they are still owned by venture investors is realize that value, at least not tangibly or completely. That takes either a sale of the company outright or an IPO. (Wall Street hasn’t provided many exits at all for VC-backed companies since 2000, and isn’t ever likely to be a primary destination for startups.)

And although we’re talking about small companies, there’s already been a pretty big impact. Even if we take a conservative average exit price of $50m for startups, multiplying that across the 100 exits that won’t happen this year means a staggering $5bn won’t get distributed in 2017 that would have in previous years. Without capital once again flowing from corporate acquirers back to startups and VCs, the entire ecosystem runs the risk of stagnation. 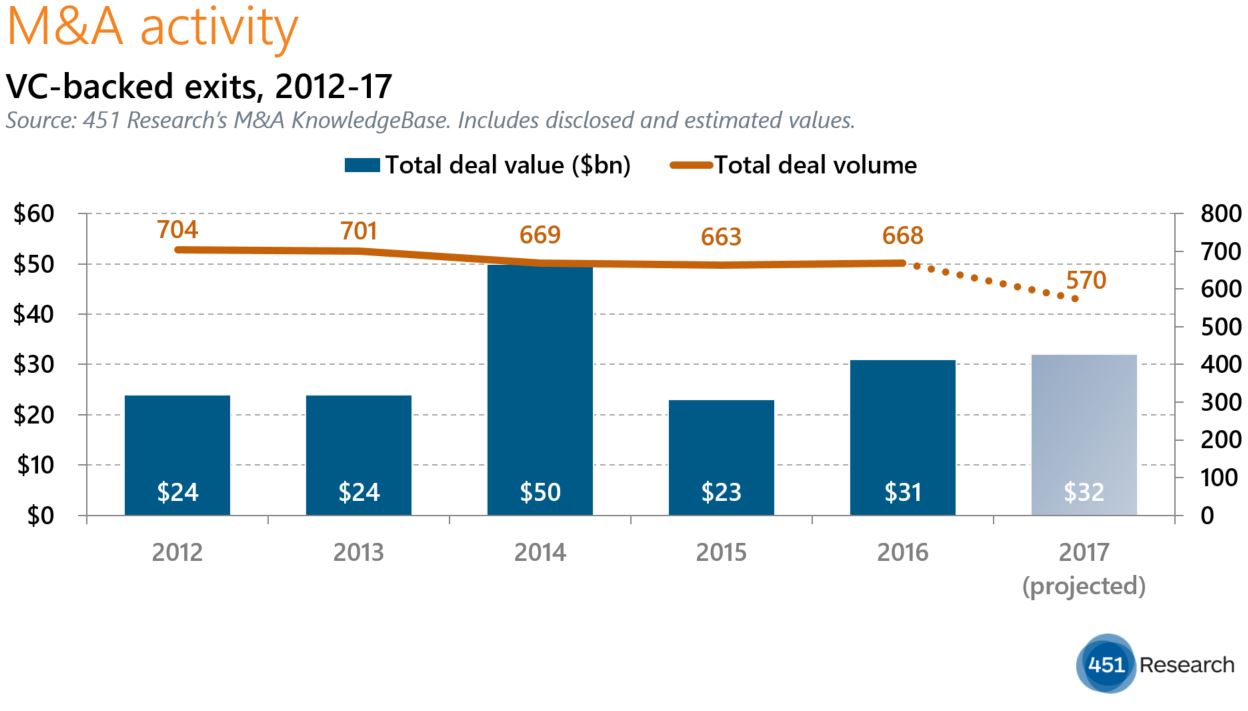