VCs aren’t buying what other VCs are selling, slamming shut a once-reliable exit door for startups. The recent shift in M&A has left the number of VC-to-VC acquisitions down about 40% so far this year compared with the previous three years, according to 451 Research’s M&A KnowledgeBase. The current weekly pace of two sales of VC-backed companies to other VC-backed companies would put this year’s total at about 105, representing the lowest full-year number of exits since the start of the decade.

There are several reasons for the decline in intra-industry deals, depending on the stature of the acquiring startup. In the rarified land of unicorns, there is a prevailing focus for VC portfolio companies on operational improvements, rather than inorganic expansion. Unlimited spending – whether it’s on KIND bars or Y Combinator graduates – has fallen out of fashion.

For instance, the M&A KnowledgeBase lists 24 acquisitions for Dropbox, which has raised more than $2bn in debt and equity. However, not one of those purchases has come in the past two years. It’s a bit different for Uber, which has its own ‘operational improvements’ to make. That besieged startup hasn’t done any deals in 2017, after doing two in each of the two previous years, according to the M&A KnowledgeBase.

Beneath that top tier of once-active, big-name startups is a fatter slice of VC-backed companies that have also cut their shopping, but for a different reason. In many cases, the startups simply don’t have the money for M&A because they haven’t been able to raise any new funding. This year is on pace to feature the fewest number of startups receiving venture investment since 2012, according to trade group National Venture Capital Association. 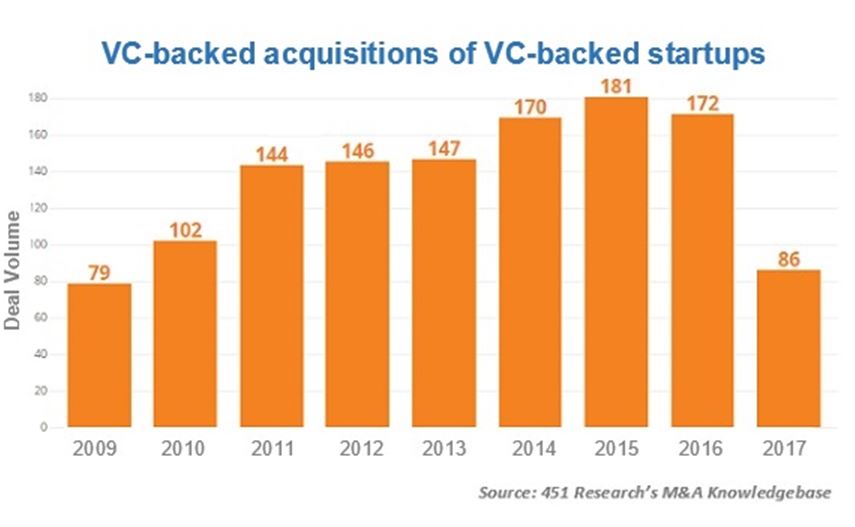