Companies looking to exit the infrastructure management space broke records in 2016, although it was enthusiastic entrants that pushed up totals last year. Acquisitions of companies that provide tools to run IT infrastructure finished 2017 at a level that’s abnormally high on strong valuations.

Purchases of infrastructure management targets finished 2017 with $8.5bn in spending across 92 deals. According to 451 Research’s M&A KnowledgeBase, both are down from the record value and volume of transactions in 2016 ($14.8bn on 121 acquisitions). Despite the high-level decline, 2017 was a stronger environment for exits in the category.

More than any other buyer, Cisco set the tone for infrastructure management M&A as two of its purchases account for half of 2017’s deal value. The company opened the year with the $3.7bn acquisition of AppDynamics, valuing the would-be public company at more than 17x trailing revenue, the highest multiple ever paid for a software vendor with more than $50m in revenue. It followed that deal with the $610m pickup of SD-WAN specialist Viptela, a smaller company that it bought at an even higher multiple.

Above-average valuations weren’t limited to Cisco. Among the 10 largest transactions in the space, only one acquisition – Clearlake’s purchase of perennial target LANDESK – came in at less than 3.5x trailing 12-month revenue. A year earlier, three of the top 10 fell below that mark, including 2016’s two largest deals – the divestitures of HPE and Dell’s software units.

Those higher multiples came as hardware providers and legacy management firms sought to expand subscription revenue from products that help customers grapple with an increasingly complex IT environment. That same trend could well fuel infrastructure management M&A this year as infrastructure, software and data look to become more distributed and cloudy.

Workloads are heading to the cloud en masse, whether it takes the form of SaaS, IaaS, private clouds or any other type. According to 451 Research’s Voice of the Enterprise: Cloud Transformation, Workloads and Key Projects 2017 survey, between 2017 and 2019 the amount of IT workloads running on the cloud is expected to increase to 60% from 45%. In that same study, 33% of respondents told us that within two years they would be sharing workloads and business functions across multiple clouds. While the underlying IT infrastructure is becoming interchangeable, the tools for managing it all are becoming indispensable. 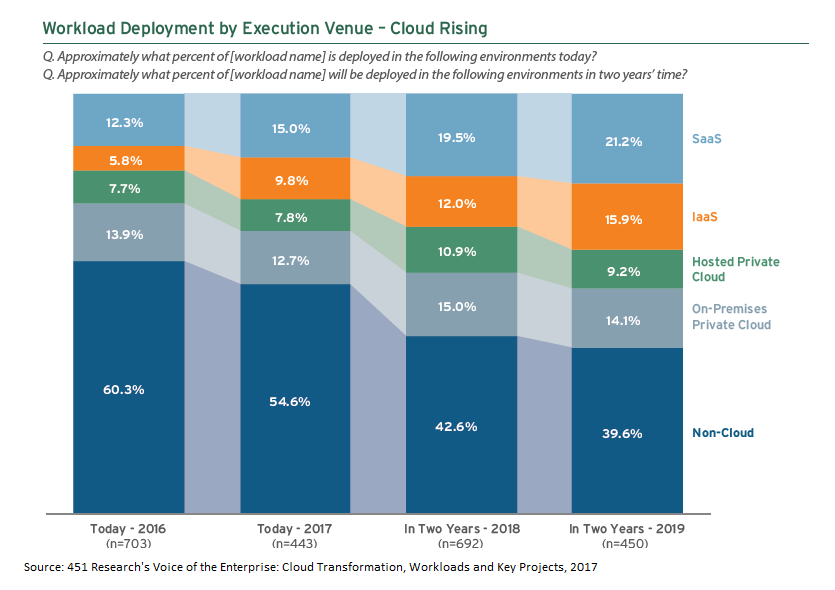