A number of the mainstay acquirers that had helped boost the tech M&A market to recent record levels stepped out of the market in 2017, clipping spending on deals by more than one-third compared with 2016 and 2015. The value of tech and telco acquisitions around the globe in the just-completed year slumped to $325bn, after topping a half-trillion dollars in each of the two previous years, according to 451 Research’s M&A KnowledgeBase. Last year’s M&A spending ranks as the lowest in four years.

The primary reason for the drop in 2017 is that tech giants – the companies that had set the tone in the overall M&A market over the past decade – didn’t shop like they once did. For instance, Oracle and SAP have, collectively, announced 16 acquisitions valued at more than $1bn since 2010, according to our M&A KnowledgeBase. However, only one of those deals printed last year. (More broadly, Oracle took an uncharacteristically long eight-month hiatus from deal-making in 2017. The prolonged absence of corporate acquirers such as Oracle was one of the primary contributors to last year’s overall M&A volume slumping to a four-year low, according to our count.)

Also weighing a bit on 2017’s totals is that free-spending Chinese buyers, who had turned tech into a favorite shopping ground, all but disappeared from the top end of the market last year. Our M&A KnowledgeBase lists just one $1bn-plus acquisition by a China-based buyer in 2017, down from nine transactions in 2016 and seven in 2015. Currency restrictions imposed by China’s authorities in early 2017 drastically reduced the ability of Chinese companies to put money to work outside their country. Also, the simmering trade fight and sparring over currency policy between Beijing and Washington DC slowed M&A between the world’s two largest economies.

On the other hand, last year saw the full emergence of a new, powerful – and largely underappreciated – force in the tech M&A market: private equity (PE). As corporate acquirers retreated, financial acquirers accelerated. PE firms announced a record 876 transactions last year, more than twice the number they did just a half-decade ago, according to 451 Research’s M&A KnowledgeBase. Deal volume, which has increased for five consecutive years, jumped nearly 25% in 2017 from 2016, even as the number of overall tech acquisitions posted a mid-teens decline year on year. 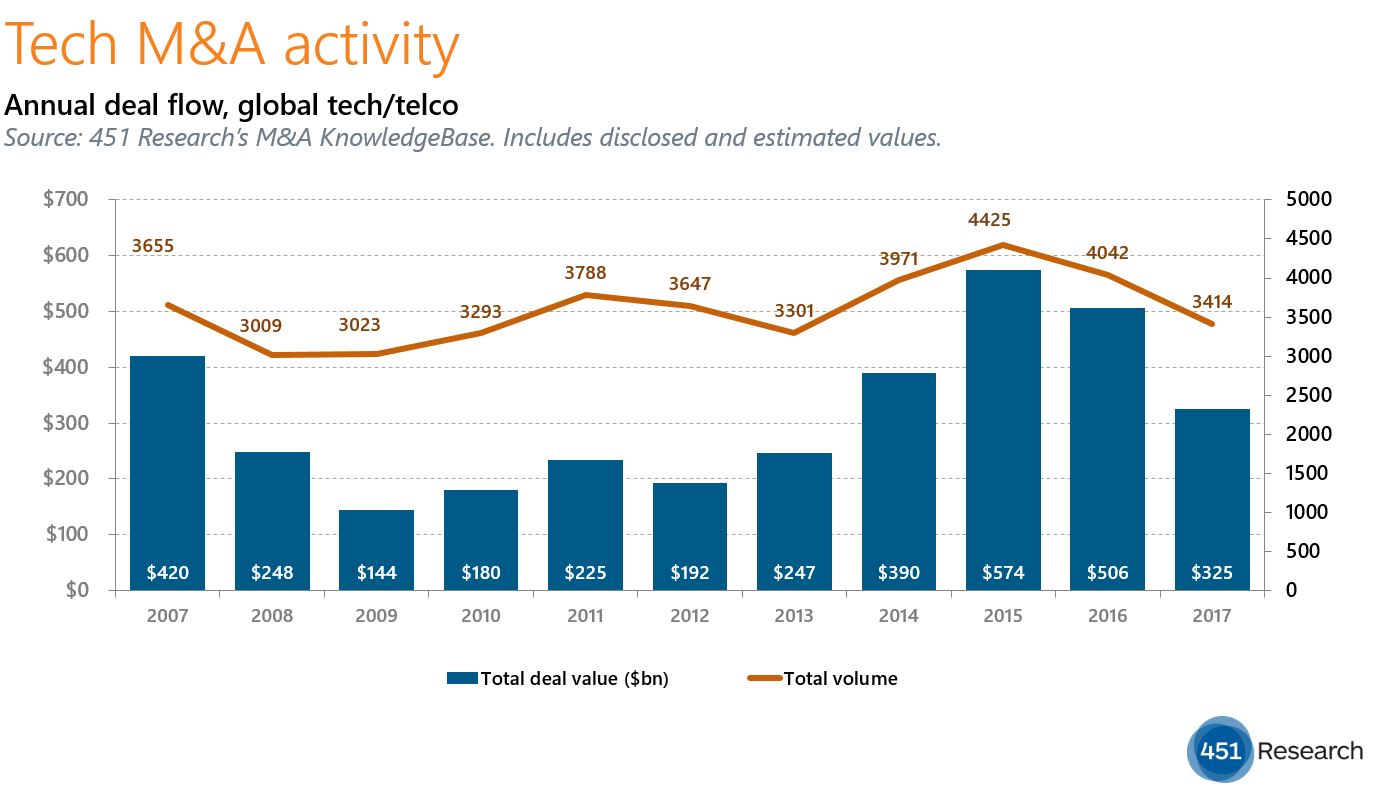