Positioned near the top of one budding corner of the CDN market, Cloudflare is angling to take a share of another with the purchase of Neumob. Its latest deal, a departure from Cloudflare’s mostly infosec M&A in the past, gets the Internet performance-optimization vendor software to bolster the performance of mobile apps.

Offering a service that protects and accelerates websites has made Cloudflare into a business with more than $170m in venture capital and annual revenue in the same neighborhood (subscribers to 451 Research’s M&A KnowledgeBase Premium can access a detailed profile of the company). Its security capabilities have pushed it near the top of the fastest-growing segment of the CDN market, defending against distributed denial-of-service (DDoS) attacks.

According to 451 Research’s VotE: Information Security survey, 38% of respondents planning to implement an anti-DDoS service were considering Cloudflare, second only to Akamai, which scored less than three percentage points higher. 451 Research’s Market Monitor service projects that this portion of the CDN market will expand by 40% this year, so it’s understandable that two of Cloudflare’s three previous acquisitions would fortify its security features.

In Neumob, it’s picking up a company whose software analyzes the signal available to a mobile device and adjusts the API calls to make the most of that signal. Although terms weren’t disclosed, it’s likely a modest-sized deal given that Cloudflare plans to shut down the service and integrate the software with its own. Neumob had about 20 employees and had raised $11m in funding. While such mobile acceleration targets have drawn strategic interest, most, like Neumob, were acquired at an early stage. Last year, privately held Instart Logic purchased Kwicr and Salesforce nabbed Twin Prime, a pair of startups with similar amounts of funding as Neumob.

Still, a decade since the birth of the smartphone, mobile app acceleration remains a pressing problem. In a survey by 451 Research’s VoCUL earlier this year, 47% and 44% of businesses told us it was ‘very important’ to provide their customers with mobile apps for customer service and shopping, respectively. At the same time, consumers’ gluttonous appetite for mobile apps shows no sign of abating. In a separate VoCUL study in the second quarter, 15.6% of consumers said they had downloaded six or more apps on their smartphone in the last month, a slight increase from the same survey done a year earlier. 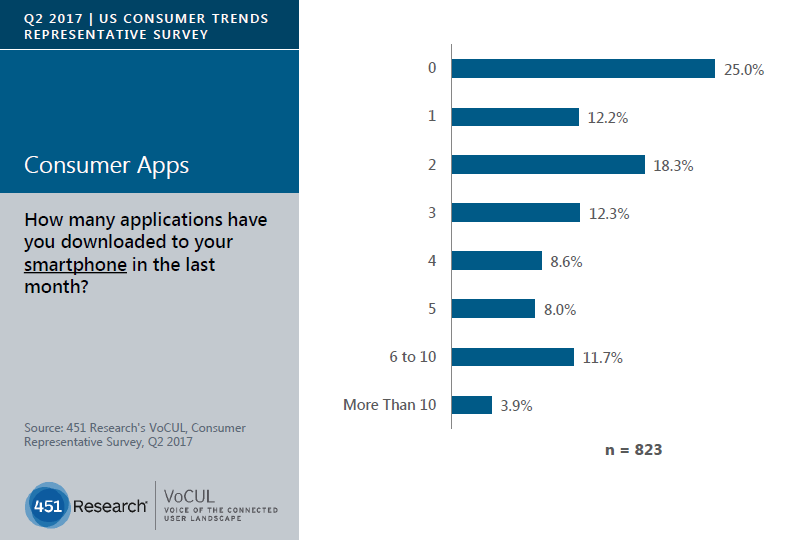