Retailers have inked a handful of deals in an effort to fend off competition from Amazon and adapt to a blossoming era of mobile-enabled shopping. Yet few buyers have reached for companies with advanced technology, instead opting to bolt on digital media, e-commerce and services businesses. Williams-Sonoma’s $112m pickup of Outward counters that trend and shows that retailers could become true tech buyers as digital commerce entails more than stitching on a website.

With its acquisition of Outward, Williams-Sonoma, a maker of upscale household wares and (through its Pottery Barn subsidiary) furniture, obtains technology that enables 3-D renderings of its inventory for use across multiple digital platforms, including a forthcoming augmented reality (AR) app that helps customers visualize furniture purchases in their own homes.

It was that mobile capability that drove Williams-Sonoma to pay $112m for a company that raised just $11.5m in venture capital. The buyer believes that more immersive capabilities on its mobile website and app have already led to sales and will continue to do so in the future. According to a study done by 451 Research’s VoCUL in the first quarter, 35% of consumers research a purchase on their smartphone at least once a week before going to a store.

For other retailers looking to follow Williams-Sonoma, there are a handful of assets remaining. Although furniture shopping is a niche application of AR, such startups have gotten their fair share of venture capital, having raised a total of $34.8m across six vendors, including Marxent, Modsy and Hutch, according to 451 Research’s M&A KnowledgeBase Premium. Today’s deal, along with Amazon’s purchase of Body Labs and Bed & Beyond’s acquisition of Decorist, could spark retailers to buy more ecommerce technologies.

Still, if past is precedent, retailers aren’t likely to rush into acquiring companies like Outward, which has filed for eight patents related it its imaging technology and was built by a team of Qualcomm veterans. Instead, they’re likely to continue to snag their e-commerce counterparts as they’ve done so far this year. According to the M&A KnowledgeBase, 11 of the 26 deals by brick-and-mortar stores in 2017 have been acquisitions of online retailers. 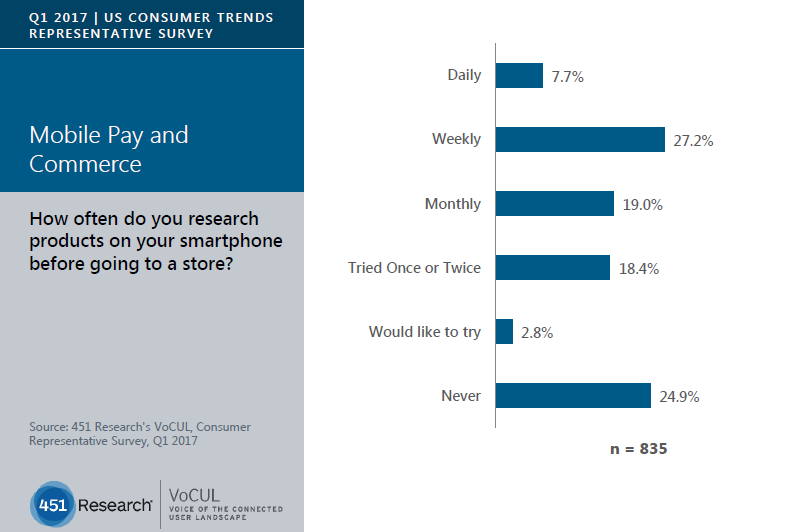