The internet’s borders are expanding into retail, broadcasting, automotive and other legacy verticals as power over that network consolidates around a handful of companies. Such a revolution should spark a conflagration of tech M&A, but it hasn’t. Acquisitions of consumer tech companies hit a three-year low, and the biggest prints driven by those changes, including Disney’s $52.4bn purchase of Twenty-First Century Fox assets earlier this week, are happening outside of tech.

Consumer tech M&A has shed a streak of three consecutive record-breaking years for the simple reason that there are few tech targets large enough to help retailers, publishers, telecom companies and broadcasters fend off Amazon, Apple, Facebook, Google and Netflix. According to 451 Research’s M&A KnowledgeBase, consumer-facing internet and mobile companies have together fetched just $27bn this year, less than half the total acquisition value of any of the last three years and a dramatic fall from the $84bn spent on such companies in 2016.

Among the group of tech companies listed above, only Google has inked a $1bn-plus tech acquisition in the last three years, showing that they aren’t spending on M&A to safeguard their coveted posts. Although outside tech, Amazon spent $13.7bn on Whole Foods, for a brick-and-mortar presence for its burgeoning grocery business. Similarly, companies from legacy markets aren’t spending heavily on consumer tech companies because there are few assets that could have an immediate impact in their fight against the tech giants. Some are buying on technical infrastructure to launch new products, as Disney did with its $1.5bn BAMTech acquisition. In retail, Target and Williams-Sonoma have made similar tech infrastructure moves this month, with their respective buys of Shipt ($550m) and Outward ($112m). Additionally, we’ve seen a wave of AI acquisitions among automakers.

Yet, there isn’t a sizeable contender in most consumer tech markets. There isn’t a consumer-tech company that could give a broadcaster scale that approaches Netflix or transform a retailer into a credible threat to Amazon. That’s not to say a lack of attractive tech companies drove Disney to its purchase of Fox or provided the rationale for AT&T’s $85bn bid for Time Warner.

In making the acquisition, Disney gets more of what it knows best and gains scale in what is becoming the battleground for the next round of video distribution – original content. (Although not a tech target, and therefore not included in 451 Research’s M&A KnowledgeBase, it’s worth noting that as part of the deal, Disney becomes the majority owner of Hulu, a Netflix and Amazon streaming competitor.) Content is increasingly becoming the catalyst for the streaming subscriptions that threaten traditional broadcasting and cable. In a third-quarter survey by 451 Research’s VoCUL, 28.4% of Netflix subscribers told us ‘original content’ is what they most frequently consume on the service. That’s a jump of almost seven percentage points from the same survey at the start of 2017. 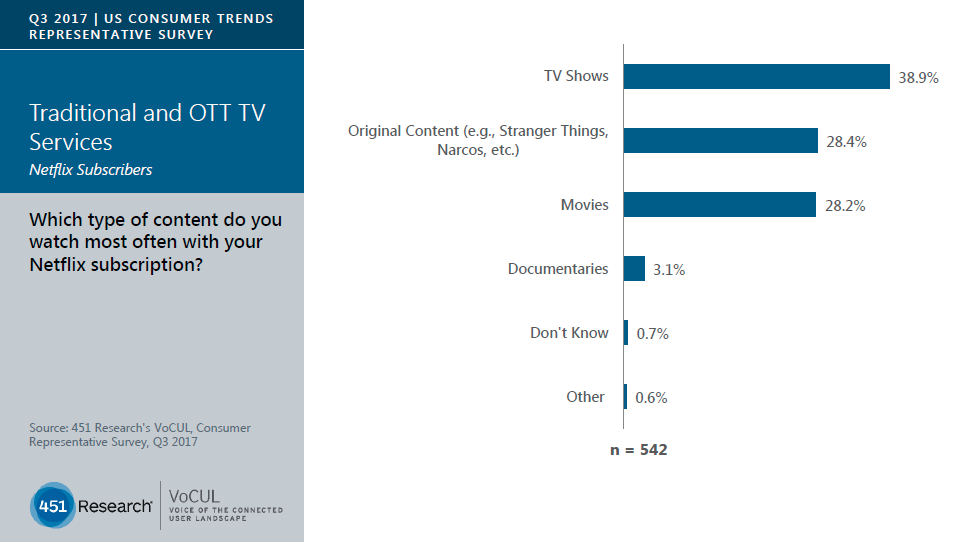