The little brothers of the software industry have stepped in front of their bigger brothers in the M&A market. Medium-sized public software companies have been inking uncharacteristically large acquisitions this year, even as the well-known vendors have been fairly reserved. And while these midmarket software firms have been big spenders recently, the deals are often missing a zero or even two compared with prices the industry bellwethers have paid in years past for some of their purchases. That has helped knock overall software M&A spending to its lowest level in four years, according to 451 Research’s M&A KnowledgeBase.

As an example of the shift in buyers, consider Oracle. The software giant has averaged at least one transaction valued at more than $1bn each year over the past decade, according to the M&A KnowledgeBase. Yet this year, it hasn’t gotten anywhere close to doing a 10-digit deal, and, in fact, hasn’t announced any acquisitions since April. On the other side, several software companies that have only a fraction of the size and resources of Oracle have thrown around a lot more money on recent transactions than they ever have before. A few prints captured over the past few months in the M&A KnowledgeBase clearly show the trend of M&A inflation among the midmarket software buyers:

-At $275m in cash and stock, Guidewire Software’s reach for Cyence in October is $100m more than the SaaS provider has ever spent on any other transaction.
-Both of the largest purchases by security software vendor Proofpoint have come in the past month. Its $60m pickup of Weblife.io in late November and $110m acquisition of Cloudmark in early November compare with an average price tag of just $20m on its previous 12 deals done as a public company from 2013-16.
-Doubling the highest amount it has ever paid in a transaction, serial acquirer CallidusCloud spent $26m for Learning Seat earlier this month.
-In a pair of deals announced earlier this year, RealPage dropped more than a quarter-billion dollars on both of its targets, after not spending more than $100m on any of its previous two dozen acquisitions.
-Upland Software announced in mid-November the purchase of Qvidian for $50m, which is twice as much as the software consolidator has spent on any of its other nine acquisitions since coming public in November 2014.

These deals by midmarket software vendors (as well as other similarly sized buyers) go some distance toward making up for the missing big names. Yet they won’t fully cover the shortfall this year. Partially due to this change in acquirers, spending on software M&A in 2017 is tracking roughly one-third lower than it has been over the previous three years, according to the M&A KnowledgeBase. 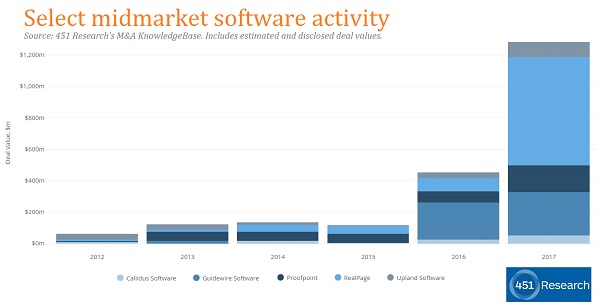