The addition of products for emerging Internet of Things (IoT) markets has spurred higher valuations on many semiconductor deals amid a record amount of consolidation in the space over the past three years. Silicon Labs’ acquisition of Sigma Designs highlights how much higher those products are valued amid larger semiconductor portfolios. The terms of the $282m transaction revolve explicitly around the seller’s home automation hardware.

According to 451 Research’s M&A KnowledgeBase, the median valuation for a semiconductor vendor has hovered a bit below 2x trailing revenue for most of the past decade, although it surged to 2.9x amid a profusion of IoT-related purchases. Indeed, many chip deals with an IoT element have traded well above the standard valuation. Consider Qualcomm’s pending $39bn pickup of NXP Semiconductors (5.5x), SoftBank’s $32bn reach for ARM (20.9x) and Intel’s $15bn acquisition of Mobileye at an unheard of 41x trailing revenue.

The $282m price tag for Sigma Designs ostensibly values the company at about 1.5x trailing revenue, but only if certain conditions are met – the seller must have at least $40m in cash on its balance sheet and it must shutter or sell its Smart TV components business within a week. (That business accounts for the majority of its revenue, but isn’t related to IoT and is heading downhill, having lost 61% of its quarterly revenue since this time a year ago.)

If those conditions aren’t met, Silicon Labs will buy Sigma Designs’ home automation components business, Z-Wave, for $240m. In other words, Silicon Labs wants to buy Z-Wave for about 5-6x trailing revenue and doesn’t value the other business lines at all. There’s a logic to that premium valuation. The market for home automation is advancing with plenty of open space. According to a third-quarter survey by 451 Research’s VoCUL, 69.9% of consumers still don’t own any internet-connected home devices, although that’s down from 74.4% at the start of the year. 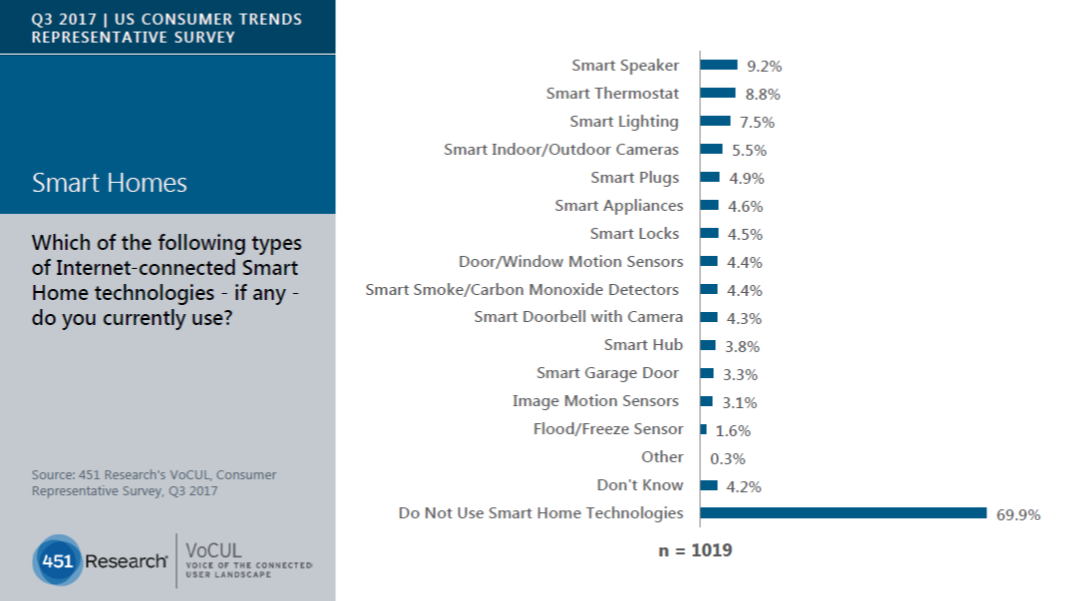